I love reindeer and finally caught Last Chance For Christmas – 2015, Lifetime, as the Day 19 selection for my Christmas Movie Review. 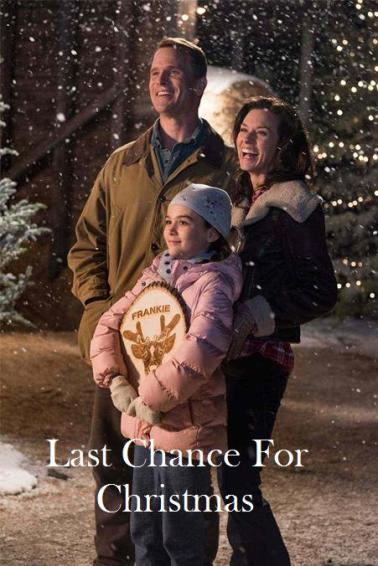 When poor Prancer goes lame a few days before Christmas, the head of Santa’s Reindeer Department, John Stockton, is tasked with finding a replacement, or Santa won’t be able to deliver presents and Christmas will be ruined.

The North Pole set-up on Santa’s whole operation was much different than I expected.  Santa’s helpers are employees with ID badges. Even the elves punch a time-clock.

What really threw me for a loop was reconciling Mrs. Claus’ approach to acquiring Frankie, the reindeer, ultimately stooping to stealing him when John refuses to do the deed even though Frankie would be the perfect replacement.  John doesn’t have permission yet from the owners, Madison, a little girl, and Annie, her mother.

Annie doesn’t trust John, even though the two are falling in love. She believes John works for Reginald Buckley, who’s squeezing Annie out of her reindeer farm for the land. John is on the verge of saving the day for all (except Reginald) when Mrs. Claus has her elves swoop in to nab Frankie.

After we watch Madison cry all night searching for Frankie, and the situation comes to a head, Mrs. Claus finally apologizes. But it is after she gets what she wants, justifying (as she did all along) that one little girl’s happiness is collateral damage next to that of the boys and girls of the world. What she did was mean.

It left me feeling like I was listening to a political argument.

Personally, I thought this was a terrible position to put Mrs. Claus in. She was bossy, demanding, and ruthless.  She ruled Santa.

After everyone has made up.

As a writer, I might have used an ambitious employee to come up with the idea of stealing a little girl’s reindeer, instead of Mrs. Claus…

On the flip side, John was fun to watch as he endearingly interacted with Madison, and bumbled awkwardly with Annie as he tried to court her.

Because of the mixed message, I’m afraid I can only give this movie 1 of 5 Reindeer Antlers. ♥