Yes, I’m feeling a little Scroog-ey.  I watched these two movies almost back-to-back. They are so similar, I couldn’t help but lump (no pun intended) them together, especially as they are both 2015 offerings. Here they are:

This is pretty much the show. 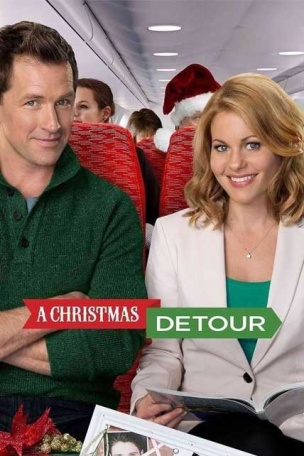 There’s that vision board…

I’ll be as brief as I can without spoiling anyone’s holiday spirit.

In The Flight Before Christmas, the heroine is recently dumped; in A Christmas Detour, it is the hero whose ex left him four years ago – for his brother!

In The Flight Before Christmas, there is a “Santa” helping our couple out. In A Christmas Detour, everyone’s on their own.

Of special note: The lead characters (though I love the actresses), let me down the most.

Because Mayim Bailik (think The Big Bang Theory – where I LOVE HER) is the lead in The Flight Before Christmas, I expected more; instead her character is two-dimensional, irritating, and whiny.  She actually made it hard to watch to the end, although my favorite scene was when she dug into a HUGE stack of flapjacks to the amazement of the hero and explained she could be herself because she knew they would never date and she didn’t have to impress him with a delicate appetite.

In A Christmas Detour, our heroine, played by Candace Cameron Bure, is over-the-top gushingly optimistic but is by degree tamped down to normal by the end of the movie. She also carries her vision board onto the plane which boggles reality that either she or the airline think this huge piece of decorated (and unprotected) foamboard could possibly fit anywhere in coach.  Later, we learn her eternal happiness hides a childhood wound.

Extra credit: The long-married couple stranded with our hero and heroine in A Christmas Detour gives this movie a boost.  As their relationship is examined, and finally rekindled, their quips and humor stand out.  YAAY!

Final Analysis:  If you only watch one, go for A Christmas Detour. Everything and everyone is more relate-able.