I’ve fallen in love all over again with my pick for Day 13 of my Christmas Movie Review with Trading Christmas, 2011, Hallmark.

I didn’t want this sweet and impertinent movie to end.  As soon as Charles drove along the picturesque streets of a charming Smalltown, USA, and noted that he must be in Who-ville, I settled in for a satisfying experience.

The acting was notched up with four seasoned actors; Gil Bellows (first on my radar as Billy on Ally McBeal), Faith Ford (originally loved her in Murphy Brown), Tom Cavanagh (Who didn’t root for Ed?), and Gabrielle Miller (so glad I watched Corner Gas).  The chemistry was especially edgy and the dialogue tart between Gabrielle and Tom.

The concept was clever enough with a few twists, although it proved confusing to explain to my husband who missed the first fifteen minutes.

Faith Ford’s character, Emily, is a widow still mourning the death of her husband three years ago. She grew up in South Woodbourne, WA, and has never missed a Christmas there. Her college age daughter, Heather, decides to buck the system for a change and go to Phoenix for Christmas with her boyfriend, Jason, although she leads her mother to believe she’ll stay in Boston instead of flying home.

Emily decides to surprise her daughter by visiting her in Boston, and looks for a home to trade for the holidays.

Meanwhile, writer Charles (Tom Cavanaugh) takes his brother Ray’s (Gil Bellows) advice to get away from Boston to meet a deadline, and ends up swapping homes with Emily.

Enter Emily’s sister Faith (See how confusing this is for husbands?), played by Gabrielle Miller, who decides to surprise her sister with a trip back home since Emily will be so sad without her daughter for the holidays.

Of course, with all the “surprises”, no one tells anyone anything… Emily and Ray meet when she forgets to deactivate Charles’ alarm, and they begin a lovely romance.

Not all goes so well for Charles and Faith, as she’s getting over a bitter divorce and he’s nursing a wound from being dumped on Christmas Eve two years earlier, and isn’t really interested in her company or her opinions on his manuscript  – at least at first.

When Emily and Charles trade homes, they both leap out of their comfort zones into the antithesis of what Christmas means to each of them, which allows for opposing dynamics.

You might see where this leads but trust me, the bantering humor and connecting moments are worth it. (My husband didn’t make a single disparaging comment.) 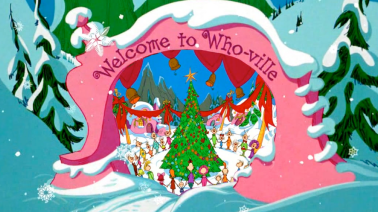 Ergo, this movie ranks a 5 of 5 Christmas cookies. ♥♥♥♥♥
(The neighbors bring about two tons of welcoming cookies to Charles – who doesn’t want to bite.)