Oh my. I can’t believe I missed seeing Prancer until this year. Written by Greg Taylor, and originally debuting in 1989 through Orion Pictures, it’s not as mainstream as other Christmas movies. I’ve been waiting two weeks for the library to call, and finally watched it here. I can’t wait to watch it again on a bigger screen.

For anyone who’s ever been that awkward kid, not quite dressed right, with the loudest off-key voice in the choir, and who continued to have faith in the unseen, magical world of childhood beliefs, you will immediately be sucked into the earnestness of almost-nine year old Jessica.

A full moon is predicted for Christmas Eve, when even more magical things happen. Jessica misses her deceased mother, fights with her older brother, and routinely challenges her working-to-get-by father as he slogs through his own grief.

She and BFF (most of the time), Carol, watch in horror as one of the decorative reindeer being hoisted over the main street, falls to the ground and breaks in two. It’s Prancer, and he can’t be put back together again.

Subsequently, Jessica happens upon an injured reindeer, who looks exactly like Prancer, and takes it upon herself to hide the creature from her father, call the vet behind his back, work for the most frightening recluse in town to earn enough to buy oats (when all her Christmas cookies run out) for Prancer, and sends a letter to Santa with her plan for Christmas Eve. 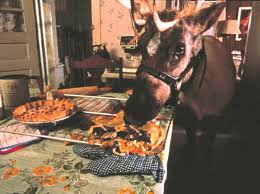 Prancer has a sweet tooth.

I won’t go any further than that, except to say that nothing goes smoothly – nor should it – when there’s an hour left in a movie.

But that’s okay, as the stakes increase, the tension rises, and the most tender scenes between Jessica and the rest of her world occur during this time.  Her favorite part of that famous New York Sun 1897 editorial to (also eight year old) Virginia goes like this:

You tear apart the baby’s rattle and see what makes the noise inside, but there is a veil covering the unseen world which not the strongest man, or even the united strength of all the strongest men that ever lived, could tear apart. Only faith, fancy, poetry, love, romance, can push aside that curtain and view and picture the supernatural beauty and glory beyond. (Full text of that editorial here.)

Rebecca Harrell Tickell plays the indomitable Jessica and I want to see more of her work; she was that good. She was supported by a stellar cast, including Sam Elliott, Cloris Leachman, Abe Vigoda, Michael Constatine, and Ariana Richards.